Trent Bridge Wagyu Stud is a family owned and operated business with more than 40 years of experience in the cattle industry. The operation is located about 40 Km east of the town of Guyra in the New England Region of New South Wales, Australia. Trent Bridge got its start in Wagyu in 2005 and has grown to now consist of a herd of approximately 300 fullblood stud females and a herd of approximately 300 commercial Angus for F1 production. These two herds are run on separate properties by the 3-member family team of Wal, Jen, and son Charlie Perry. They predominantly breed for and target the F1 market, selling aproximitely 60 fullblood Bulls for F1 production each year. In addition, they use their top fullblood sires on their commercial Angus herd for F1 production, selling the resulting calves at approximately 330 kg after weaning to JBS who feeds them for 400 days and slaughters them.

Trent Bridge calves seasonally, starting August 1st of each year for both the fullblood and Commercial Angus herds. The herds are subsequently bred during the months of October and November. The commercial Angus herd is bred through natural service by the top bulls produced in Trent Bridge’s fullblood herd. Heifers in the fullblood herd are run through a synchronization program and bred AI (artificial insemination). They then are pregnancy checked and resynched if open for another round of AI before being exposed to a bull for natural service. The fullblood cows are run through a synchronization program and are AI’d. Approximately 10 days after AI, bulls are turned out to clean up any cows who did not hold to the AI. The sires used for AI are purposefully chosen by the team at Trent Bridge knowing their end goal is predominantly F1 production. 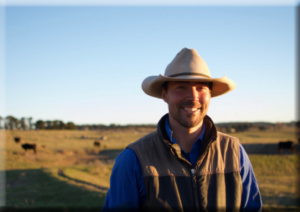 With a heavy focus on the F1 market, the breeding program and mating decisions are centered around the goal of producing high marbling animals while maintaining moderate growth. In recent years, Trent Bridge has put into place a new data feedback system in partnership with JBS – the buyer, finisher, and harvester of their F1 calf crops. This system is a sire progeny test program and has allowed Trent Bridge to make more informed breeding decisions for improving genetics within their fullblood herd and the sires they are using for F1 production. Charlie says their goal for F1 carcasses is to average a 6.5 to 7.0 on the AUS Meat Scoring System. They have been as high as a 7.4 average AUS Meat score in recent years, however they are still looking to improve and maintain consistency. To this end, Trent Bridge is utilizing this feedback to identify individual sires for each carcass through a meat scrape. The data is then summarized to give an average Carcass Weight, Eye Muscle Area, and Marble Score for each of the sires used in F1 production from that year. This program has already assisted in identifying a potential star sire in the making for Trent Bridge. Trent Bridge J77 has topped the 1st class of sires with his progeny ranking highest in average carcass weight, marble score, and eye muscle area. The limitation on this system is time, since from conception to slaughter it takes almost 3 years. Therefore, the breeding decisions made in 2014 didn’t yield any carcass data/results until 2017. At which point, Trent Bridge was finally able to incorporate that data into decision making. In another effort to speed up genetic progress and lower the generational interval, Charlie says Trent Bridge is using predominantly yearly bulls to breed the F1s and utilizing genomics in decision making. 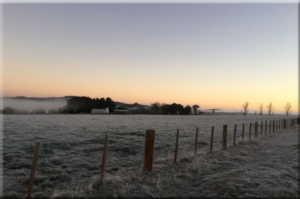 Genomics is an exciting new tool currently being utilized and implemented by Trent Bridge. Genomics has assisted in several different aspects of the business, such as sire selection in their previously mentioned F1 production, identifying the best calves from their ET program, and has helped identify cattle on the bottom- end of the herd genetically. Genomically enhanced EBVs have increased accuracy, which assists in finding the sires with the best suited traits for F1 production. These traits are the back bone of the Trent Bridge breeding program: achieving a high marble score EBV and maintaining moderate growth. This unwavering philosophy is the reason Trent Bridge remains a continued leader in EBVs with 80% of their sale bulls ranking in the top 10% for Terminal Carcass Index. An integral part of producing elite EBV animals, Charlie operates an ET (Embryo Transfer) program with the top females in the herd each year. He sources elite semen to use on these females and transfers the resulting embryos into the commercial Angus herd and contracts with a local Shorthorn herd for recipients. In the ET program specifically, genomics is already having an impact. The ET program produces many full siblings and genomics has been helpful in identifying which have the greatest likelihood to perform to Trent Bridge’s goals. The ability of genomics to better recognize the potential of cattle allows for the identification and removal of bottom end cattle from the herd. Trent Bridge has used this strategy to improve the rate of genetic gain in the herd through the elimination of bottom end animals when the opportunity arises. These are a few of the ways Trent Bridge is already working this new and ground-breaking technology into their decision making.

A key part of any AI program is sire selection, when choosing sires for breeding the fullblood herd, Charlie tells us he is picking sires for two different purposes. The majority of the herd is bred with the goal of producing high marbling while maintaining moderate growth for the F1 market, then a small percentage of the herd is bred to a different group of sires with the goal of producing herd replacements. In the case of breeding to make bulls for siring F1s, Charlie says TF 148 has historically been one of their “go to” sires consistently producing sons with the ability to pass on high marbling while still retaining moderate growth. In contrast, Charlie’s favorite sires for producing herd replacements are Haruki  2 and Itohana 2, with an “honorable mention” going to Terutani 40/1. These sires produce females with good growth and maternal abilities. Currently, Trent Bridge has a variety of exciting genetics on the ground from sires such as Macquarie Y408, Westholme B0039, Westholme Namiyoshikatsu, Sumo Cattle Co Michifuku F126, and more. When asked if he has any favorites among the young stock, Charlie said “I like the Y408 offspring for their overall structural correctness and that they still have the high marble score EBVs.” Most of these high EBV young animals have been produced through Trent Bridge’s own embryo transfer program. 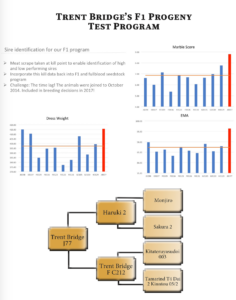 The ET program at Trent Bridge typically consists of five to ten of their top females. These females have been held back from the main herd after calving to be put into their flush program instead of being rebred. Since these donors are missing a whole repro cycle and will not be producing a calf, Trent Bridge attempts to maximize the donor’s time spent out of the production cycle by flushing them as much as possible, to recover the maximum number of embryos possible for their program. Utilizing their commercial Angus herd as well as a recipient herd of Shorthorn nearby, Trent Bridge typically has 60-80 ET calves born each year. This varies somewhat year to year depending on the embryo production of donors and conception rate of transfers. This well managed and planned ET program is one of the many reasons that Trent Bridge has become a leading producer of F1 sires and fullblood breeding stock.

A select few of the elite EBV sires produced in the ET and AI programs are specifically chosen to become F1 sires in Trent Bridge’s own commercial Angus herd. The previously mentioned progeny test system put into place through JBS has given Trent Bridge a fantastic source of tangible data that assists in breeding and genetic decision making. The first year of the sire progeny test program has revealed some extremely valuable data in identifying sires that have overperformed and underperformed. This new data allows for decisions that would not otherwise have been made, such as removing the poor performing sires from production and identifying those outperforming their contemporaries by wide margins.

The top performer of the first year of Trent Bridge’s progeny test is a Haruki 2 son, Trent Bridge J77. He is still awaiting his genomic test results, however his parent average EBVs show his fantastic potential to possess extreme growth traits derived from his sire Haruki 2. Not only does J77 have the potential for growth, he also has the potential for high quality carcass traits. Look no further than his 003 dam Trent  Bridge F C212, or his maternal brother the popular Trent Bridge F F0115. Trent Bridge F F0115 has genomics with impressive and balanced EBVs for growth and carcasses. F115 excels with a MS of 1.4, EMA of 2.9, and MF of 0.32. This combination of elite carcass EBVs and maintaining reasonable growth allows F115 to put together impressive index numbers of $351 TCI, $167 Self Replacing Index, $144 Fullblood Terminal Index, and $143 F1 Terminal Index. 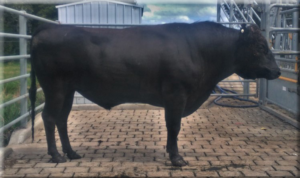 These two sires are out of one of Charlie’s favorite cows in the herd, Trent Bridge C212. She is a Kitateruyasudoi daughter behind which is TF 151, Michifuku, TF Kikuhana, and then the famous matriarch TF Dai 2 Kinntou 3. It is no surprise this maternal line is producing elite sires for Trent Bridge as TF Dai 2 Kinntou 3 is the matriarch behind elite sires TF Terutani 40/1, Mayura Itoshigenami Jnr, Westholme Fujiteru 3, Sumo Cattle Co Michifuku F126, and Sumo Cattle Co Itoshigenami C158 to name a few. C212 was born in 2007 and now has 13 registered progeny sired by Itoshigenami, B0039, Haruki 2, and Shigeshigetani among others. She has genomics and performs to the Trent Bridge breeding philosophy almost perfectly, with great carcass traits while maintaining high growth traits. C212’s combination of high growth EBVs and great carcass traits puts her Self Replacing Index at $185, a value in the top 5% of the breed. C212 is one of many elite cows at Trent Bridge with numerous females over $300 TCI, a result of the focus on high marbling and a well-managed ET and AI program.

Between the new programs and tools being implemented at Trent Bridge and the promising results from J77, F115, and their dam C212, the future is full of exciting possibilities. Be sure to pay attention to what Wal, Jen, and Charlie are doing at Trent Bridge. It will no doubt be on the cutting edge of management and genetics! 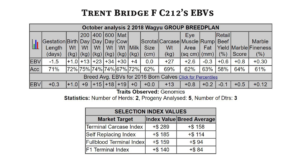